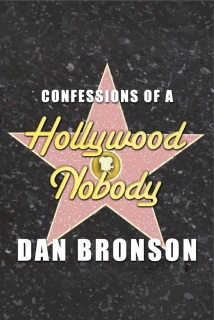 Everyone has read biographies and memoirs of Hollywood celebrities - the lucky ones who have actually made it to the top. Dan Bronson's book is different. It tells the story of all the others - the ninety-eight percent who've worked hard and well but below the radar, the "nobodies" without whom movies and television would cease to exist.

Dan's fun, funny account of his wild ride on the rollercoaster of Hollywood is littered with stars, both behind the camera and in front of it - actors like Natalie Wood, Bruce Willis, Arnold Schwarzeneggar, Jason Bateman, and, yes, Tori Spelling; directors like George Seaton, Alfred Hitchcock, George Cukor, Gil Cates, Francis Ford Coppola, and John McTiernan; executives like Dawn Steele, Jeffrey Katzenberg, Michael Eisner, and Ned Tanen. And along the way Dan provides behind-the-scenes glimpses of the making of films both big and small - everything from Galaxy of Terror to Godfather III to Die Hard: With A Vengeance.

But his real story is how the dream factory works and what it takes to avoid being crushed in its gears. A survivor's guide to Hollywood, it is a must-read for anyone interested in film.